About the Metropolitan Region Amsterdam

The Metropolitan Region Amsterdam (MRA, known in Dutch as Metropoolregio Amsterdam) is comprised of 32 municipalities, two provinces (North Holland and Flevoland) and the Transport Authority Amsterdam. Around 2.5 million people – more than 14 per cent of the Dutch population – live within the MRA. It is the country’s most robust economic region and the MRA also performs well on the international stage. 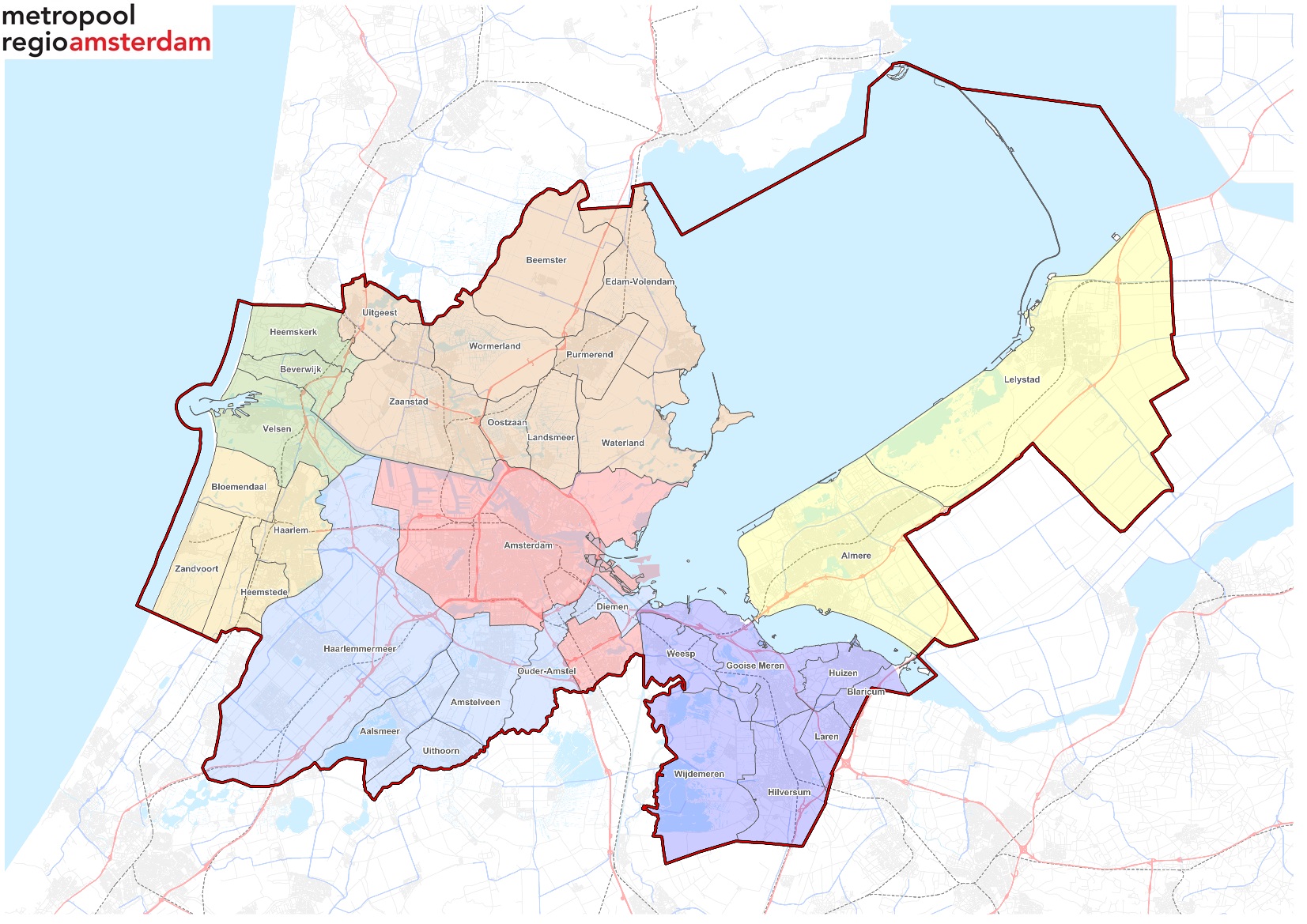 The Metropolitan Region Amsterdam (MRA, known in Dutch as Metropoolregio Amsterdam) is comprised of 32 municipalities, two provinces (North Holland and Flevoland) and the Transport Authority Amsterdam. Around 2.5 million people – more than 14 per cent of the Dutch population – live within the MRA. It is the country’s most robust economic region and the MRA also performs well on the international stage.

Its greatest strengths are that it is home to many talented and entrepreneurial individuals, a wide diversity of business activity, good infrastructure by land, air and water, excellent digital connectivity, a broad palette of living and working environments in historical cities, garden suburbs and new towns, and the highly varied and spectacular metropolitan landscape of sea, dunes, peat meadows and the freshwater lake of IJmeer-Markermeer. Within this constellation, the City of Amsterdam exerts a magnetic pull.

The Metropolitan Region Amsterdam strives to be an internationally competitive region, with compact cities, a landscape that is attractive to day-trippers and holidaymakers, as well as a perfectly functioning infrastructural network that interconnects the residential cores and connects them with the countryside and the rest of the world.

The Metropolitan Region Amsterdam consists of 35 different authorities divided over seven sub-regions (Amsterdam, Amstelland-Meerlanden, Zaanstreek-Waterland, Almere-Lelystad, Zuid-Kennemerland, Gooi en Vechtstreek and IJmond). In reality, this region functions as a single city with a population of 2.5 million inhabitants, 300,000 businesses and 1.5 million jobs. The region also boasts two airports, seaports, the financial centre of the Netherlands, the world’s largest flower auction in Aalsmeer, Media Valley and clusters of creative companies. It is also one of the most important social hubs in the country and a growth engine for the national economy.

A region that ranks among the international top class is, of course, also strongly connected with the rest of the world. Schiphol Airport and the ports play a significant role in this, but even more important are those who live and work in the MRA. With a population comprising more than 180 nationalities and with a strong international orientation, the other side of the world is never far away.

The MRA spans the ‘daily urban system’ of Amsterdam, which is roughly the area within which the majority of the daily commutes takes place. Within this region, there are mutual dependencies between a wide range of domains – accessibility, job market, housing market, etc. The actions of one municipality have an impact on the other municipalities.

Consequently, many of the challenges facing the Metropolitan Region Amsterdam require a regional approach. It is only together that we can overcome them. The complexity of the challenges is considerable and the extent regional. The housing and job markets, for example, are regional.

Within this region, there are mutual dependencies and interconnectedness. Our history has taught us that the success of the region has always been the result of interaction between various cores. To this very day, the international success of Amsterdam has an impact on the region and the attractiveness of Amsterdam is determined largely by a well-functioning surrounding network. The MRA is more than just the sum of its parts.

As the authorities, we can make a difference through regional collaboration, but we cannot do so alone. We determine the future of our region together with the business community, social organisations, knowledge institutions, social entrepreneurs and the residents of the Metropolitan Region Amsterdam. The national government and water authorities are essential partners in achieving the goals established for the region.

The various authorities in the MRA collaborate based on the MRA Agenda, which forms the content basis for the partnership. The 2020-2024 agenda aims to strengthen the international position of the Metropolitan Region Amsterdam as a top economic region with a high quality of life.

However, we are facing urgent, major and complex challenges. These put pressure on this position and quality of life and, in turn, on the level of welfare and well-being of those who live and work in the MRA. To respond appropriately to these challenges within a long-term perspective, the MRA Agenda has two guiding principles: a future-proof metropolis and a well-balanced metropolis.

The overall ambition – working to become an international top region with a high quality of life by investing in a future-proof and well-balanced metropolis – has been translated into four administrative tasks:

0: Further strengthen the partnership.
1: Pursue a resilient, inclusive and ‘green’ MRA economy.
2: Build with housing needs in mind and strengthen the quality of life of the entire region through growth.
3: Accelerate the establishment of the metropolitan mobility system.

A goal has been formulated for each of these tasks, which has been developed into various results and actions. The authorities in the MRA address these jointly and report on the results to their members of the Provincial Councils and City Councils.

More business and other information on the Amsterdam region can be found on the website www.iamsterdam.com/en.

If you have questions about the Metropolitan Region Amsterdam, contact the organisation by email to info@metropoolregioamsterdam.nl.

Also make sure to watch the film ‘We are the Metropolitan Region Amsterdam’ (1:58) ↓